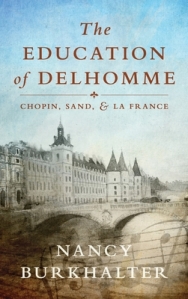 The Education Of Delhomme

Beaulieu Delhomme, a piano tuner, faces the guillotine for committing treason against the newly elected French president due to his part in the bloody worker uprisings in 1848. The one person who could save him from this fate is his former arch-rival, the celebrated author, George Sand. The plot leading to his imprisonment revolves around the triangle of composer Frédéric Chopin, his lover George Sand, and Delhomme, Chopin’s loyal piano tuner. Both Sand and Delhomme compete for the attention of Chopin, who fights a losing battle with tuberculosis. The president’s spymaster uses this triangle to lure cash-strapped Delhomme into exploiting his friendship with Chopin to spy on George Sand, whose fiery rhetoric threatens the new president.

At first, before the uprisings that marked a tumultuous period out of which France’s Second Republic grew, Delhomme favors preserving the status quo because any policy changes might jeopardize his (and Chopin’s) wealthy client base. Sand wields her pen against the oppressive laws and ridicules Delhomme for his views.

Delhomme changes his opinion of the monarchy when he sees how his nephew is abused as an orphan working in a piano factory in industrial London. Delhomme becomes a double agent, paid to spy for the president while secretly working for the resistance. Sand softens her contempt when she discovers that he has switched allegiances and now promotes workers’ rights.

Delhomme is caught working for the resistance, jailed in Paris’ infamous Conciergerie prison, and faces a trial for treason. Even Sand’s testimony is not enough to trump that of the vaunted spymaster, but her fame may be enough to persuade the new president to pardon him.

Chopin’s touch is so gentle, as if he thinks I might break by pressing too hard. Of course, that is preposterous that I would break. No one would ever call me fragile. But it thrills me to be treated that way. His kisses are so sweet and equally delicate, like being caressed by the wind.

He and I have a different relationship than I am used to. Good God, that brute Mallefille treated me like a prostitute. He had his way with me so often that the only thing missing was the payment for services. That can be thrilling, but other times, it feels as if I am on a construction crew: “George, do this. George, do that. Slower . . . slower now faster faster.

Chopin is like a dance partner who senses my moods and needs. I hope all my past lovers read this. Do you hear me? My moods and needs. Not just yours. Lovers should receive and give. I can tell so much about a man when we are in bed. Does he treat me like a farm animal? Or does he look at me, talk to me, tell me he loves me, and mean it? Behavior in lovemaking reveals a man’s true personality and deep-seated view of women: Are they chattel or your equal? Which is it? It should be the first step in any relationship.

Sometimes, I do not even need to go through the tedious process of sleeping with them. For example, I instinctively knew that Liszt would be an aggressive and bossy beast, throwing his lover around and pouncing on her like a lion capturing a zebra, not caring a jot about her. And . . . I was right.

Chip-Chip would never demand I do anything. He cherishes me, and I adore that. I adore him.

I do not care for men who are on the other side either—too wishy-washy, waiting for me to orchestrate things. “Tell me what you want, darling.” I want to be made love to! I want someone to take my soul to the moon and back, not make me feel as if I am the conductor of a train. I run the other way from those sorts.

But the worst are those men who treat the whole event like a job. In and out, in and out. No passion, no inkling there may even be a second person in the room, let alone the bed. I find it an ideal time to develop characters and plots while undergoing such quotidian maneuvers. And I may even blend the experience into a story. I call it ‘secret sex’ because only one of us is having it. And it is not I.

Such are the pitfalls of an untethered life. But I can be either master or mother, not both; being somebody’s mistress takes too much time.

One thing I cannot abide, no matter how suave and tender, is a malodorous man. That oaf who almost raped me in the convent when I was sixteen stank to high heaven—a putrid, bitter, unforgettable smell too. It signals helplessness to my brain. Perhaps workmen like that man cannot escape such a fate because they labor in the hot sun, and perspiration dries on their bodies and clothes. But, to bring that reek into bed and then expect me to muster romantic feelings is unforgivable and certainly antithetical to their aim. What does one say to such an inconsiderate muttonhead to encourage better hygiene? For once, I am at a loss for words. I have no recourse but to expel him post haste. Smell may be one thing, but given the panic that that smell triggers, I would advise any suitor eying my bed to check his underarms first.

Nancy Burkhalter
is an educator, writer, journalist, linguist,
and piano tuner.
She holds a Master’s degree in journalism and English education,
as well as a Doctorate in linguistics
from the University of New Mexico.
She has taught composition for many years in the U.S.,
Germany, Saudi Arabia, Kazakhstan, and Russia.
Her overseas work led to an interest in comparative education,
especially critical thinking.
Both observations and research led to her book and blog,
Critical Thinking Now.
In 2019, she was a recipient of Go Back, Give Back,
a fellowship through the State Department
to train teachers in St. Petersburg, Russia.
A resident of Edmonds, Washington, Burkhalter loves to travel, write, and learn languages.

You can enter the global giveaway here
or on any other book blog participating in this tour.
Visit/Follow the participating blogs on Facebook/Twitter,
as listed in the entry form below, and win more entry points!

Tweeting about the giveaway everyday of the Tour
will give you 5 extra entries each time!
[just follow the directions on the entry-form]

CLICK ON THE BANNER TO READ MORE REVIEWS
AND EXCERPTS