Oh my goodness, this book was just what I was looking for. I love art, and I like thrillers, and to have both in one book is exactly what I needed.

Marion Spicer seems bland at first, not really interested in her job, not very enthusiastic, but when her estranged father dies and leaves her his estate and collection, subject to certain difficult conditions, her life changes. She has a personal stake now, in this collection, and this mystery of missing sculptures, and there are hundreds of thousands, if not millions of dollars of her surprise inheritance at stake.

The inheritance, and this mystery, becomes her obsession, to the point where she lies to friends and colleagues, sleeps with a sleazy art gallery owner, and bargains with thieves and murderers.

Fortunately, this book didn’t make it easy to pick out the perpetrators, which made it a much more enjoyable read. I only wish it had lasted longer, as the ending did seem somewhat abrupt. I felt like there could have been another chapter, maybe even two. And there’s an epilogue that intrigues. I’m hoping this book is part of a series, not unlike the Nico Sirsky books by Frederique Molay.

The assistant’s directive dripped with arrogance.

Without any further formalities, he disappeared behind a copper-colored silk wall hanging. She followed and discovered a reinforced door that opened to a narrow staircase. She hurried down the steps just as the door closed behind her. It made surprisingly little noise, considering its weight.

Marion stopped at the bottom of the stairs. The space was cold and devoid of light, sound, colors, and smells. She peered into the darkness. It seemed like an unknown abyss, and she had the disturbing sensation that she was being watched.

Gaudin flicked on the lights. A shiver traveled up Marion’s spine, and she gasped. In the faint illumination provided by the bulbs, literally hundreds of clay sculptures and vessels took shape. Floor-to-ceiling shelves were lined with odd-looking creatures. Some had hollow eyes, stunted bodies, and swollen arms and legs. Many looked sickly and tormented. They stared at her with lifeless eyes.

Marion’s mouth went dry, and her legs began to shake. Eventually she inched closer and examined the sculptures one by one. She knew that some of the pieces were pre-Incan portrait vases. She had never cared for these indigenous works. And in such large numbers, she found them disturbing. Certainly there was nothing aesthetically pleasing about the frozen assembly of cripples in this place.

A second room was equally disquieting, filled as it was with oversized phalluses and female genitalia in every possible position and depiction—pimple-covered erections, clitoris-shaped noses, pumas copulating with toads, skeletal women being sodomized. By the looks of it, Magni had relished the world of sexual obsession. Marion just stared at the impassive expressions on the faces of the silent participants.

“Thousands of years, and these bodies are still here for us to see and touch. Isn’t that fascinating?” Gaudin said from behind her.

Marion didn’t respond. She could barely breathe. This space was a shrine to her father’s obscenity, negotiated at the cost of gutted tombs and stolen memories. And for what? A dark and irrational desire to claim ownership over the souls of the dead? An attempt to give them a second life? Or to extend his own? Was he afraid of something? Or of someone?

Anne-Laure Thiéblemont
on Tour August 10-29 with 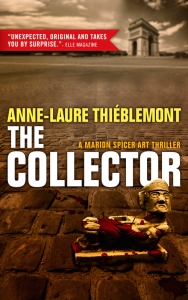 Some people collect art, others collect trouble. Marion Spicer spends her days examining auction catalogues and searching for stolen works of art. She is a top-notch investigator when it comes to eighteenth-century art. But for her it’s just a job and her life is well ordered. All this changes when she inherits a huge and very prestigious collection of pre-Columbian art from a father she never knew. There are conditions attached: she must first find three priceless statues. That is when her troubles begin. Her father’s death sparked much greed, and Marion finds herself facing the merciless microcosm of Paris art auctions and galleries, with its sharks, schemes, fences, traps, scams, and attacks. Her quest draws her into a world where people will kill for a love of beauty.

An art reporter and trained gem specialist,
Anne-Laure Thiéblemont
is known for her investigations into stolen art
and gem trafficking.
She currently works as a magazine editor,
and splits her time between Paris and Marseille.

Sophie Weiner is a freelance translator and book publishing assistant from Baltimore, Maryland. After earning degrees in French from Bucknell University and New York University, Sophie went on to complete a master’s in literary translation from the Sorbonne, where she focused her thesis on translating wordplay in works by Oulipo authors. She has translated and written for web-based companies dedicated to art, cinema, and fashion as well as for nonprofit organizations. Growing up with Babar, Madeline, and The Little Prince, Sophie was bitten by the Francophile bug at an early age, and is fortunate enough to have lived in Paris, Lille, and the Loire Valley.
Follow Le French Book on Twitter | on Facebook
Sign up to receive their latest news and deals.

You can enter the global giveaway here
or on any other book blogs participating in this tour.
Be sure to follow each participant on Twitter/Facebook,
they are listed in the entry form below

Global giveaway open internationally:
5 participants will each win a copy of this book.
Print/digital format for US residents
Digital for all other residents

CLICK ON THE BANNER
TO READ OTHER REVIEWS, EXCERPTS, GUEST-POSTS

6 thoughts on “Book review: The Collector, by Anne-Laure Thiéblemont, with Excerpt & Giveaway!”